Voicing the Hidden is a York Civic Trust creative project exploring the rich relationship between heritage and the imagination.

Held at the beautiful and historic St Denys Church at the heart of the Walmgate community, Voicing the Hidden: Live Event  featured short films and live readings that showcased the poems, writings, and photographs produced through the Trust’s Heritage Open Days 2021 creative heritage walks around the historically rich streets of Walmgate and Fossgate.

It was fantastic to see people out on the streets of York directly engaging with heritage beyond the big tourist hotspots. Fossgate and Walmgate have a real working class history which the tours and follow-up event helped to unearth and keep alive.

In collaboration with award-winning York-based poet Robert Powell, the project asked questions about how imaginative responses to the past influence our sense of place and how we understand our city.

“Some of York’s history is famous and well-known, but lots of it is hidden and anonymous. Through imagination, writing, photography and art, we can help bring this ‘hidden’ aspect of the past to the surface in exciting ways. I was really impressed by what the Civic Trust ‘Creative Walk’ participants produced!”

As well as members of the public who joined us on the heritage walks, it was especially encouraging to see so many members of the St Denys congregation and Walmgate community get involved.

Thank you again to everyone who contributed and came along to support the tours and follow up event. The Trust hopes to build on our productive relationship with the Walmgate community, and continue to collaborate on future projects that celebrate and redefine York’s heritage.

Please enjoy these evocative short films produced using the poems and photographs sent in by participants who were inspired by the Voicing the Hidden heritage walks around Walmgate and Fossgate. The walks were carried out in September 2021 as part of our Heritage Open Days programme.

Please enjoy reading the variety of poetry and prose produced by the creative contributors who attended out Voicing the Hidden creative walks in September 2021. The writing is inspired by the hidden heritage around Walmgate and Fossgate, two historically rich York streets with strong working-class roots.

York-based poet Robert Poet collaborated with the Trust on our Voicing the Hidden creative heritage project, from the walking tours in September 2021 to the live showcase event in January 2022. He has treated audiences throughout to multiple readings from his repertoire of locally-inspired poetry. Robert also produced an original poem inspired by St George’s Churchyard and the supposed grave of Dick Turpin, one of the stopping points on the heritage walks.

On a leaden-grey York Wednesday
two women drill their pets in the ghost-church yard,
heaven’s gates bound shut with a spare dog-collar
lest pouncing pooches plot a prison-break.
You could say it’s sacrilegious, but hey –
why let the green and pleasant just go to waste-land?

Both owners and dogs take the Heritage Tour Group
in their stride: the women shout, the canines leap.
The past is more unknown than known, says the guide,
hopefully helpfully, and sure enough, in this old city
of steeples and walls and blue plaque recollections,
under everyday trainers and paws another local history lies,

dropped just yesterday by soldiers, servants, shoppers,
serfs, washerwomen, tradesmen, dreamers and drinkers –
coins with the profiles of emperors and queens that slipped
from slurring pockets, a slow, lost rainfall of nails,
hairpins, buttons, buckles, bottles, and various
plastics bound for immortality – silent as these graves

but ever-ready for rousing and resurrection
into new histories cobbled for tourists and citizens.
The Tour Group wanders, wondering Where are the dogs
of yesteryear? while at the far end of the plot,
beneath an upright stone, cunning Dick lies low,
bones deep in dirt and legend, maybe.

You can find out more about Robert and his poetry here.

Click here to view the other poems produced from the heritage tours. 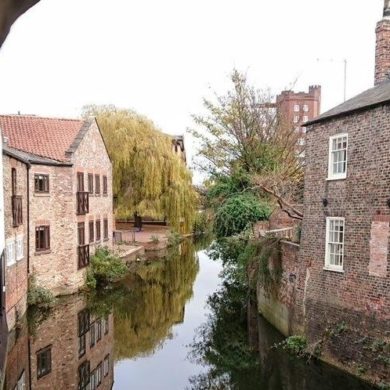 On Saturday 29th January 2022, the Trust hosted a special event at St Denys Church to celebrate poetry and photography […] 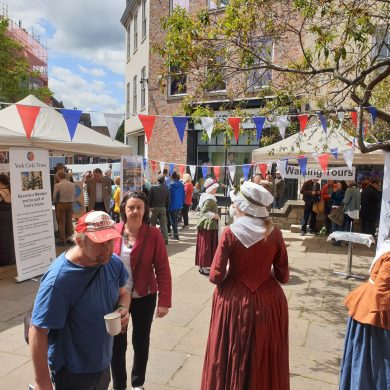 Success – ‘Get to know your York’ day 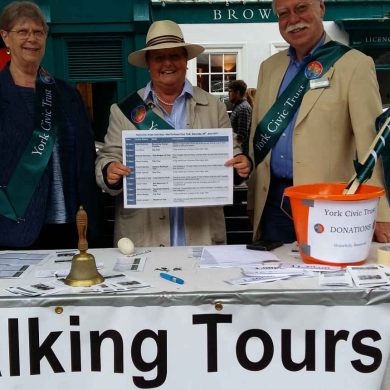 ‘Get To Know Your York’

FREE WALKING TOURS by York Civic Trust Do you care about York and its past, present & future? Visit our […]

No. 13 Stonegate, is a 15th century house with additions of the 16th and 17th centuries. At an unknown date a wooden female figure was attached at ground-floor level to the house on its corner with Little Stonegate. Usually now referred to as a “ship’s figurehead”, close inspection shows that the bare-breasted lady – anatomically endangered by passing traffic – has only one arm and one feathered wing and is much more likely to have come from not the prow but the

stern of a sailing ship, probably having been attached to the side of a projecting quarter gallery. This female figure – is she arising from the sea like a mermaid or is she a protecting angel? – dates from the mid- or late seventeenth century, a time when formerly open quarter galleries at the ship’s stern were now being enclosed and had windows added.

It was always thought that women, bare-breasted or not, would bring bad luck if they were aboard a ship, so why use them so often for decoration? Sailors believed that the gods of the sea would be so taken with such images that they would calm the wind and waves and give the ship safe passage. Just why this stern figure was removed we shallprobably never know. It could have been that the ship had merely come to the end of its days or was, perhaps, too large to enter port with the silting up of the River Ouse and was then dismantled. We can only speculate.

York grew up at the junction of two rivers: the Ouse and the Foss, and thus was readily supplied with transport and communications links to the outside world via the Humber Estuary and the North Sea. The Romans built jetties here, with wharves and warehouses on both rivers. In the eighth century, the Northumbrian scholar Alcuin confirmed York as being built by the Romans ‘to be a merchant-town of land and sea’ and ‘a haven for the ships from distant ports’. A century later, further developments came with the Vikings whose larger ships and skills in navigation opened new routes, allowing York to export its own timber and import goods from as far away as China. Archaeological finds from Viking York include amber and furs from Scandinavia, silk from China and the Middle East, copper alloy pins from Ireland, a cowrie shell from the Red Sea and pottery from Germany.

York continued as an important trading port after the 11th century Norman Conquest and by the 14th century the city was England’s richest city after London and the Merchant Adventurers its richest guild. York’s merchants exported wool, grain and cloth to Northern Europe and continued to import luxury items from overseas such as olive oil, figs and raisins from Spain. By the late-16th century, however, larger sea-going ships could no longer navigate York’s rivers partly due to their greater size and partly due to the increasing build-up of sediment in the Ouse. Only smaller, lighter boats could now reach York and, as a result, Selby and Hull began to assume much of York’s trading importance. As the wool trade of the West Riding increased, the shorter land route to these ports became preferable, as did the later canal route via the Rivers Aire and Calder. The Corporation of York was under pressure to act and, after much debate, Naburn Lock was finally built in 1757 and the river Foss canalized, but the river trade failed to revive.

Now the River Ouse is primarily used for pleasure and recreation. It is one of the key attractions in York’s tourist trade with leisure cruisers, canoes and rowing boats plying the routes once used by the city’s trading ships. Many of the wharves and jetties have gone giving place to restaurants, cafés and pubs and paved riverside walks provide a welcome escape from the bustle of the city.

Master woodcarver and stonemason Dick Reid OBE restored the figure on behalf of the York Civic Trust in 1978.

Nikolaus Pevsner and David Neave: The Buildings of England, Yorkshire: York and the East Riding (London, 1995)

This is an opportunity for people interested in York – its present, past and future – to learn about the history of York, as well as a chance to chat with volunteers and learn about the events, activities and membership benefits of York Civic Trust, whilst supporting us by purchasing refreshments, homemade cakes and sandwiches.

Visit our displays at St Crux Hall to book on a walk and chat to York Civic Trust volunteers.

The 2019 walk schedule can be downloaded Get To Know Your Your Walk Details leaflet.

There is no pre-booking for these walks except on the day at St Crux Hall.
As walks will be limited to manageable numbers, please arrive early to avoid possible disappointment.

Help us to promote this event by downloading the 2019 A4 Get To Know Your York poster.

Get To Know Your Your Walk Details leaflet or collect a leaflet detailing walk times and descriptions at the Reception area of Fairfax House, Castlegate, York, YO1 9RN.

We hope you enjoy the walks and marquee displays, and are tempted to become a member of the York Civic Trust

The purpose of the weekend is to give the opportunity for members of the public to discover more about York Civic Trust and the heritage of the city of York through guided walking tours.  Priority will be given to non-members of YCT.

The Association of Voluntary Guides to the City of York (AVG) was formed in 1951 as a part of the city’s contribution to the celebration of the Festival of Britain. Although the main site of the Festival was in London, at a site on the South Bank, the festival was a nationwide affair with exhibitions in many towns and cities throughout Britain. The City of York Council’s librarian suggested the idea of using knowledgeable citizens to show both the people of York and visitors around their historic city. This idea was quickly supported by the council and a public meeting called to promote the idea. A group was formed at the very first meeting and a walking tour devised.

Over the years, as more and more tourists began to arrive, so more and more walks were planned, until now there are between 80 and 90 voluntary guides, mostly retired people, with a detailed knowledge of the city. In 2017 the Association guided 13,300 visitors to the city around their tour which has remained virtually unaltered since 1951. The AVG trains its own guides following a five-day course culminating in an oral exam. There are tours of the city every day of the year except Christmas Day, one in the morning and one in the afternoon, with a third on summer evenings. They all leave from outside York Art Gallery in Exhibition Square, last two to two and a half hours and are free of charge. The standard tour starts from Exhibition Square and ends in the Shambles, looking on the way at Roman fortifications, St Mary’s Abbey, King’s Manor, Bootham and Monk Bars, the Treasurer’s House and St William’s College. The AVG tours do not include the Minster which has its own guides.

Our sincere thanks to Barrie Ferguson, Secretary of AVG, for information about the voluntary guides.