Plaques at 3-5 St Helen’s Square, York YO1 8QW (inside what is now Carluccio’s restaurant), and at The Chocolate Works, Bishopthorpe Road, York YO23 1DE

Joseph Terry was born in Pocklington in 1793, the son of a farmer, Thomas Terry, and his wife, Elizabeth Dale. After serving an apprenticeship, Joseph opened an apothecary’s shop in Walmgate, York. In 1823 he married Harriet, the daughter of William Atkinson, of Leppington Grange near York. They had five sons and three daughters. Harriet was the sister-in-law of Robert Berry, one of the partners in confectioners Bayldon & Berry. William Bayldon had founded the business in York in 1767 and, after forming a partnership with Robert Berry, the shop and factory moved to new premises in St Helen’s Square in 1818. William retired in 1821 and on the death of Robert Berry in 1825, Joseph Terry and George Berry formed a new partnership, renaming the business Terry & Berry, with Joseph utilising his skills as a chemist in the development of new sweet and confectionery products.

On the departure of George in 1828, Joseph was in sole charge of the business, renamed Joseph Terry & Co, with a small factory at the rear of ‘The Front Shop’ in St Helen’s Square making cakes, comfits, sugar sweets, marmalade, candied peel, mushroom ketchup and medicated lozenges. By 1840, assisted by the expanding railway network, Joseph was sending his products “to seventy-five towns all over the North of England, the Midlands and as far south as Luton and London”. His products included jujubes, candied citron, mint cakes, candied eringo, coltsfoot rock, anchovies, acidulated drops, gum balls, pomfrit cakes, and lozenges made from squill, camphor and horehound.

Joseph died at Huntington in 1850 and his second son, also Joseph (1828-1898) and later Sir Joseph, educated at St Peter’s School, took control of the business in 1854 with his two brothers, renaming it Joseph Terry & Sons. The brothers leased a riverside site in Clementhorpe which had access to the Ouse for transport to and from Goole and the Humber. A twice-weekly steam packet brought imported goods including sugar, glucose, cocoa and orange and lemon rinds in brine as well as deliveries of coal for the steam plant.

In 1854 Joseph married Frances, daughter of Dr Joseph Goddard. They had three sons before she died in 1866. Joseph, with abundant energy for expanding manufacturing, transferred the business to a new site where he erected a steam-powered factory. Two years later there were 400 different items on the price list. In 1871 he married Margaret, daughter of William Thorpe of Aldborough House, Malton, with whom he had a son and three daughters. The eldest son, Thomas, a partner after 1880, built up exports to Australia and New Zealand. During that decade the firm received a number of exhibition awards for its confectionery.

Terry’s had been making chocolate products since the 1860s and a separate chocolate factory was constructed at Clementhorpe in 1886, but chocolate to eat rather than drink was still a novelty. The firm was incorporated as Joseph Terry & Sons Ltd in 1895 when it had 300 employees. The premises in St Helen’s Square were retained as a shop, restaurant and ballroom with a later cocktail bar and soda fountain. This now forms part of Carluccio’s restaurant; the original shop front and lettering together with some of the internal fittings remain.

A member of York City Council from 1860, Joseph served as Sherriff of York in 1870 and was Lord Mayor four times, the last time in 1891. In 1886 he was not only Lord Mayor but was asked to represent York at the Queen’s Jubilee and was awarded a knighthood in 1887. He assisted all the main societies in York from the School of Art to the city’s cricket club. He was a freemason, member of York Sunday School committee and President of York Conservative Association. However, these activities in addition to his business interests eventually proved too much; he overexerted himself at a by-election and died of heart failure at the Royal Station Hotel in 1898.

His son, Thomas, was already a partner; another son, Francis, was to be chairman for 35 years. Noel Goddard Terry MBE (1889-1980), his grandson, was to be chairman later. During the First World War, serving with the 3rd/5th West Yorkshire Regiment at the Western Front, Noel sustained serious injuries to his right leg in 1916 and was invalided out. Noel married Kathleen Leetham (1892-1980) in 1915 and the chairman for 11 years was no longer a Terry but H.E. Leetham, Noel’s father-in-law.

Alexander Terry, Noel Terry’s grandson at the unveiling of the plaque at the Chocolate Works, 4 July 2017

Francis and Noel Terry bought a site in 1923 on Bishopthorpe Road and Terry’s Confectionery Works, an impressive Art Deco building, was opened in 1926. On Leetham’s death, Francis and Noel became joint managing directors, Noel concentrating on sales and Francis, often described as a perfectionist, on the production side credited with establishing the high quality and reputation of Terry’s chocolate. It was Francis who was instrumental in introducing some of the most popular Terry’s products which are still in production today. Produced at the Clementhorpe factory, Terry’s first box of chocolates with a selection of different fillings, was called the Britannia. The interwar years saw the development of more chocolate selections including Spartan and All Gold (1931). Terry’s Chocolate Apple was introduced in 1926 and the famous Chocolate Orange, which remains very popular today, in 1932. To commemorate the founding of the original business, the 1767 box of chocolates was also created in 1931 by Francis who was later knighted for his services to the industry and was considered a master chocolatier. 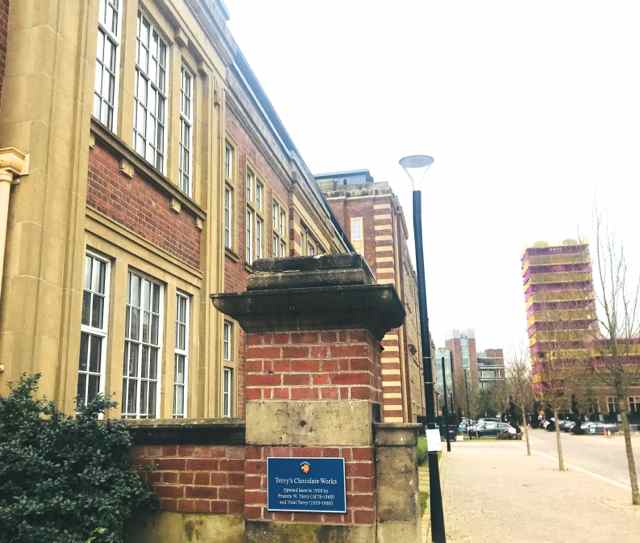 The Chocolate Works in Bishopthorpe Road

Noel commissioned Walter Brierley in 1925 to build Goddards, an Arts and Crafts house on Tadcaster Road, now owned by the National Trust. It was to be Brierley’s last major domestic project; he died in 1926 and the house was completed in 1927. Noel filled the house with antiques and assembled one of the best private collections of Georgian furniture in the country. When the National Trust accepted Goddards in 1984, the importance of the house and its contents was not recognised. The house became the Trust’s regional headquarters and the collection of furniture was rescued by York Civic Trust and put on public display, appropriately, in the restored interiors of Fairfax House, one of York’s finest Georgian townhouses.

Also overlooked was the importance of the garden created by George Dillistone, the landscape and garden designer who established his own practice in 1926 on the strength of the Goddards commission. Of particular note is the extensive rock garden, a popular feature of gardens in the 1920s and 1930s. Dillistone was to design several other major gardens in the interwar period including the formal gardens at Castle Drogo in Devon with Edwin Lutyens as architect. Noel and his wife Kathleen lived at Goddards until their deaths in 1980. More recently, the National Trust has re-evaluated the house and the major rooms were opened to the public in 2012. For the 2017 season, the display of items relating to the Terry’s and the York chocolate industry has been extended.

During the Second World War, confectionery production was halted and the factory was taken over by F. Hills & Son of Manchester as a shadow factory to manufacture and repair aircraft propeller blades. After the war the business resumed in difficult times due to rationing.

In 1963 Forte took over the business. Noel remained on the board until he retired in 1970. Peter Terry, Noel’s son, retired in 1985. The Colgate-Palmolive Company acquired Joseph Terry & Sons in 1977, then United Biscuits acquired it from Colgate. In 1993 Kraft Foods took control, amalgamating Terry’s with Jacobs Suchard to create Terry’s Suchard. From 2000 the brand was renamed Terry’s removing the reference to York. In 2005 Kraft closed the factory and production was moved abroad. Famous names such as Chocolate Orange and All Gold continue to be made outside the UK. After a lengthy planning process, the key buildings on the Bishopthorpe Road factory site are now being converted into luxury flats at the heart of the Chocolate Works development. The new townhouses on the site by David Wilson were awarded Best Design at the 2016 national Housebuilder Awards.

There are no upcoming events at this time.